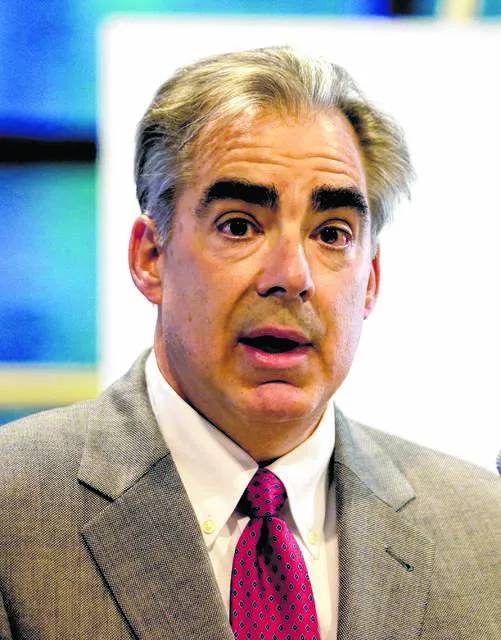 PLAINS TWP. — Chris Belleman, executive director of the Luzerne County Flood Protection Authority, is asking elected officials at all levels to support the authority in its pursuit of grants to improve its flood-fighting mission.

Belleman called the officials together at a breakfast Friday at The Woodlands Inn to explain the need to complete two projects that will improve flood protection along the county’s 16-mile levee system.

During his presentation, Belleman first explained the need for the authority’s “Closure Structures Modifications Project.”

He said there are 20 levee openings that are necessary to accommodate roads, railroads, pedestrians and other purposes. He said 12 of those openings require the installation of pre-fabricated steel and aluminum closure structure components — stop-logs, panels, posts, portal doors, etc. — to close the opening. Another eight openings require the installation of nearly 8,000 sandbags to close.

Belleman said the authority wants to eliminate three openings and convert four of the sandbag closures to a pre-fabricated sliding gate. He said that would significantly improve efficiency through a reduction in critical labor, material and time — some 1,000 man-hours — in closing the openings during an emergency.

The total project cost is estimated at just over $1 million.

The locations and a breakdown of estimated costs:

“We have been told that our project is the top-rated project in the state,” Belleman said.

“If we would have another flood like we did in 1972, we probably would never recover,” said Makowski, referring to the massive destruction of the Agnes flood.

U.S. Rep. Matt Cartwright, D-Moosic, said it makes sense to spend $1 million to ward off a potential $15 billion in damages from a high-water event.

“We are already behind this,” Cartwright said. “We have offered our support for approval of the FEMA grant.”

The authority purchased the former storage building from Hanover Township for $7,500 in June 2017. Belleman said the total project cost is $612,800.

“If the business community lacks confidence in the ability of the LCFPA to protect their investments, then the consequence would be a slow exodus of businesses and families from the 12 communities,” said Belleman.

”I fully support these initiatives,” said Mullery. “We have the opportunity to better protect more than 14,000 residential, commercial and industrial properties with a reasonable investment in our local authority. This is the type of return on investment that taxpayers expect and deserve.”