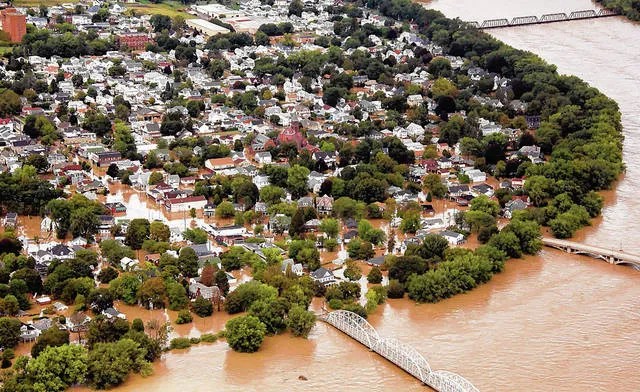 More Luzerne County property owners along the Susquehanna River will be forced to buy flood insurance for the first time or pay higher rates under new federal flood maps tentatively set to take effect in September 2022.

The Federal Emergency Management Agency (FEMA) estimates about 2,000 structures will be added to the Special Flood Hazard Area, while under 100 will be removed.

County Flood Protection Authority Executive Director Christopher Belleman said he worked with the county GIS/Mapping Department to identify each parcel falling into the changing map boundary lines. He then supplied lists to municipalities so they can remove those without structures and notify property owners.

The authority has no jurisdiction over formulating the federal maps but is assisting municipalities because they need help navigating the changes, Belleman said. He also is trying to schedule FEMA representatives to appear at an open house along with flood insurance and map specialists equipped to answer residents’ questions.

Forty Fort Mayor Andy Tuzinski said an open house is needed because the federal website is “very hard to navigate” and contains terminology and protocols that are challenging to decipher.

A report provided by Belleman indicates 270 Forty Fort properties were newly added to the high-risk flood zone in the proposed map.

“Some insurance rates will go up, and people will be upset. We have to help them understand,” Tuzinski said.

In Exeter, 570 property owners were newly added to the high-risk flood zone, many related to Hicks Creek flooding, according to Belleman’s list. With other changes to existing flood zone parcels factored in, approximately 1,000 properties are collectively impacted, said Exeter Manager Kendra Radle.

The borough sent letters to property owners to alert them, Radle said.

Property owners will have until Sept. 30 to appeal their proposed inclusion in a high-risk flood zone. Radle said officials from Exeter and some other impacted municipalities are discussing the possibility of jointly funding municipal appeals contesting the mapping changes.

An appeal must be based on technical data showing the proposed flood hazard information on the preliminary map is “technically incorrect,” the agency said.

Officials in Kingston have scheduled a meeting with FEMA to contest the new map’s movement of an estimated 330 borough properties into a high-risk flood zone, said borough Administrator Paul Keating.

“We will appeal with every measure available to us,” Keating said.

Copies of the proposed new maps have been forwarded to municipalities, officials said. FEMA also has an online “flood map changes viewer” allowing searches by address. Information also has been posted on the authority site at lcfpa.org.

The last flood map changes took effect in 2012 as part of a nationwide update. At that time, 10,000 county properties were added to the high-risk flood zone, while more than 8,000 were removed from that designation.

However, these maps were largely based on an older hydraulic model of the river, Belleman said.

Since 1978, county property owners have submitted more than 4,000 National Flood Insurance Program claims, and approximately 2,000 of those claims have been from outside Special Flood Hazard Areas, FEMA said. Communities along the upper Susquehanna River were particularly impacted by extensive flooding in 2011, it said.

“This demonstrates that there is significant flood risk in Luzerne County, and the updated maps reflect that reality,” FEMA said. “It’s important for everyone, whether they are in or out of the flood zone, to consider flood insurance.”

Leading up to development of the new maps, the federal government completed a new analysis of a 100-mile stretch of the Susquehanna that included the county and incorporated data from floods in 1996, 2004 and 2006 in addition to the 2011 one, officials said.

It found increased runoff to the river from new development, a larger quantity of river sediment and tree growth and more frequent and intense storms attributed to climate change, Belleman said. Improved technology made the modeling more accurate, he said.

“The flood risk has increased. This whole process is culminating with the release of these flood maps,” Belleman said.

The government translates its findings through a standard known as a “base flood elevation,” or the estimated height water is projected to rise during a “base flood.”

Commonly known as a “100-year flood,” a base flood has a 1-percent chance of happening or being exceeded in any given year.

The new hydraulic study concluded the base flood elevation has increased by an average of 3 feet along the Susquehanna from Sunbury to the border of Lackawanna County, Belleman said.

FEMA said it has worked closely with state and community officials on the flood map updates. The agency held three meetings with local officials in the county since it started this process in 2015 to explain the changes and solicit community input, it said.

“To make sure that people stay safe from flooding, new construction in the Special Flood Hazard Area is required to be built above the estimated height of flood waters, ” FEMA said.

The agency noted property owners also have recourse after the maps take effect. They can submit a “Letter of Map Amendment” at any time if they have elevation information for their structure that shows the property is above the base flood elevation. If the amendment is approved, the flood insurance requirement will no longer apply, it said.

While the new maps are set to take effect the end of 2022, implementation of mapping changes tied to two stretches of the Wyoming Valley Levee are currently on hold — the Plymouth and Wilkes-Barre/Hanover Township reaches, Belleman said.

The base flood elevation increase means those levee reaches are no longer topped with a required 3-foot safety buffer called a “freeboard.”

The flood authority has asked the U.S. Army Corps of Engineers to complete a new evaluation of both reaches hoping it will restore accreditation to continue providing preferred insurance rates to properties protected by the levee system. The Army Corps recently revised how it evaluates flood protection systems to no longer deem freeboard a major determining factor, he said.

Accreditation indicates the federal government is confident a levee will provide adequate base flood risk reduction for insurance and building requirements.

”We feel strongly we will get both reaches accredited, but in the unlikely chance that the Corps can’t make that determination, we will pursue a rehabilitation of the levee to get it certified,” Belleman said.

Completed in the early 2000s, the Wyoming Valley levee-raising cost around $175 million and was based on water modeling analysis performed in the mid-1980s, Belleman said.

Belleman has stressed the accreditation doesn’t change the levee’s proven effectiveness holding back the record high Susquehanna in 2011. The levee was designed for 41 feet with an additional 3-foot freeboard to protect against the prior record 1972 Agnes Flood, Belleman said.

“Tropical Storm Lee was a larger event, greater than what the levee was designed for, and the system performed very well,” Belleman said.

Belleman has noted a massive 10,000-square-mile watershed drains into the local stretch of the Susquehanna — a swath that stretches west and north and extends into the Finger Lakes and Catskills in New York.