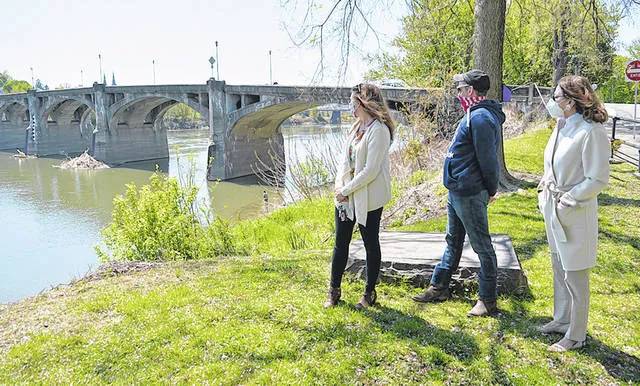 West Pittston residents will get break on flood insurance

WEST PITTSTON – Residents in the Garden Village can expect as much as a 15% discount on flood insurance due to the new status the borough has received on May 1 after two-years of working toward an improved rating with the National Flood Insurance Program (NFIP).

In 2011, Tropical Storm Lee flooded West Pittston at a record level damaging more than 900 structures creating shy of $100 million in damage. When floodwaters receded, the Federal Emergency Management Agency (FEMA) determined the borough had serious deficiencies in the their implementation of the NFIP requirements therefor placing West Pittston on probation resulting in high insurance premiums.

“What that meant was in addition to the insurance premium, each and every person with flood insurance had to pay an additional $50 penalty,” Jim Brozena, engineer and West Pittston resident, said.

Brozena, the former Luzerne County Flood Protection Authority executive director, is the consulting engineer for West Pittston. He is best known for his contribution to the Wyoming Valley Levee Raising Project while with the county. Related Video

After the 2011 flood, West Pittston, with the guidance of FEMA, developed a long-term recover plan revealing 21 projects that would help the borough become “a clean, safe and progressive community rooted in family values and historical traditions.”

West Pittston Tomorrow was created at that time to help in implementing the 21 projects such as CodeRED®, a system to alert residents by phone in case of an emergency or general announcements regarding the borough.

“In 2016, West Pittston finally got off probation and it took the Zone Hearing Board a few years to clean issues regarding permits but it finally all got straightened out to get to that point,” Brozena said. “In 2018, FEMA returned to West Pittston to conduct a Community Assistance visit to check on the borough’s status finding the borough in good standing.”

Prior to the 2018 FEMA findings, borough officials were interested in becoming in a disaster resistant community.

“In order to accomplish this West Pittston put together a multi-pronged approach together,” Brozena said. “That includes the levee feasibility study, a project beginning to kick off gathering all the data with all properties in the flood plan regarding the ground elevation is and what the first floor elevation is and when all of it’s done it can be analyzed to say what is the best means of providing damage resistance to flooding.”

“West Pittston leadership, hard work and accomplishments in flood-plain management are to be celebrated because of the additional protection in the borough’s actions provide to its citizens and properties,” Nicole Lick, FEMA Region III Deputy Division director for Mitigation, said.

“On May 1, we were brought into the program and West Pittston is one of only 40 communities in the entire Commonwealth of Pennsylvania out of 2,500-plus municipalities,” Brozena said. “There are only five in all of Luzerne Co.”

The Class 7 rating qualifies NIFP policyholders to receive the Borough’s Special Flood Hazard Area (Zone A) of a 15% premium discount and a 5% discount in Zone X. The total savings to Borough residents exceeds $26,000 per year.

“I administrated the CRS Program along with Alan’s (Brezinski, West Pittston Flood Plain manager) help,” Laura Holbrook, LCFPA mitigation specialist, said. “Alan and myself put in most of the work, with consultation of Jim (Brozena). We created a lot of various plans for the borough in order to receive credit through the CRS Program to get that 7 Classification. We put in about a year’s work to get it from a 10 Class to 7.”

According to Holbrook, West Pittston will be audited once a year in order to maintain a 7 Class.

“I’ll be making sure we’re in conformance,” Brezinski said, in maintaining a 7 Class. “We have to cross our “t’s” and dot our ‘i’s” including public outreach to issuing permits and enforcing ordinances.”

“We love working with the Flood Authority,” Quinn said. “They have been very helpful and Laura, along with Jim and Alan, have put in a tremendous amount of time into this project.”

West Pittston Tomorrow, along with Brezinski will be overseeing the CRS.

“I would like to thank Laura, Alan and Jim for getting this program started and following through and getting it accomplished,” Quinn said. “It’s very exciting that West Pittston is coming into the CRS at a 7, a 15% reduction is flood insurance, it’s very exciting.”